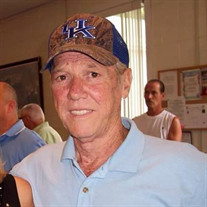 Charles (Buddy) Bailey, 62, of Burnside, formerly of Bledsoe, received his heavenly healing after a courageous fight with cancer, surrounded by loving family on October 29, 2017. He was born November 5, 1954 to Martha Nolan Younts of Burnside, and the late Charley Bailey of Bledsoe, Ky. He was married 43 years to his loving wife and High School Sweetheart, Carolyn Corn Bailey. Buddy is preceded in death by his father and Son, Kevin Bailey. He is survived by his wife Carolyn; Daughter, Angie Bailey Cochran and Husband Danny of Harlan; Son, Daniel Bailey of Burnside; Grandson, Danny Nathaniel Cochran; Sisters, Nancy (Wayne) Elkins of Dawson Springs; Helen (Glen) Crain of Bledsoe; Vilva (Wayne) Donahue of Ft. Lauderdale, Fl; Judy (Steve) Crowder of Rushville, IN. Additional survivors include sister in law, Penny (Wayne) Marlatt of Rushville, IN and brother in law, Marvin Corn of Shelbyville, IN. Buddy had a great love of people and the outdoors. He was friendly, out – going and was very well liked by all. He enjoyed sharing his knowledge and passion of fishing, hunting and gardening with family and friends. He also loved to travel and explore new places. He will be missed by numerous nieces, nephews, family and friends. Visitation will be in the Chapel of Mount Pleasant Funeral Home on November 1, 2017 from 6PM to 9PM. Funeral Services will be held also in the Chapel on November 2, 2017 at 11AM with Bo Cornn officiating. Burial will be in the Greenhills Cemetery in Bledsoe with his grandson and nephews serving as pallbearers.

Charles (Buddy) Bailey, 62, of Burnside, formerly of Bledsoe, received his heavenly healing after a courageous fight with cancer, surrounded by loving family on October 29, 2017. He was born November 5, 1954 to Martha Nolan Younts of Burnside,... View Obituary & Service Information

The family of Charles (Buddy) Bailey created this Life Tributes page to make it easy to share your memories.