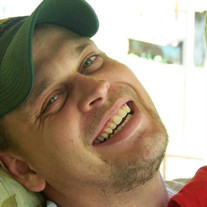 David Mitchell Osborne, 41, of Bledsoe, KY, passed away peacefully late on the evening of April 17, 2020 at the Bluegrass Hospice facility in Lexington, KY from complications due to an infection of the heart. David was a Christmas gift, born in Harlan, KY on December 25, 1978. He is the son of Mitchell and Theresa Osborne of Bledsoe. David is survived by one son, David James Tincher, of Hamilton OH; one daughter, Mackenzie Faith Osborne, of Coldiron; and a granddaughter Lucille Anne Marie Tincher also of Hamilton OH. He is also survived by his two sisters, Leann and her husband Bill Nantz, of Bledsoe; Valerie and her husband Lenoard Schrock, of Leo-Cedarville, IN; and a brother Christopher and his wife Jennifer Hockenberry, of Totz, three nephews Riley and his wife Lakin Osborne, of Corbin; Andrew and his wife Victoria Whitehead and their three children Aubry, Gannon, and Easton, of Loyall; Connor Schrock, of Leo-Cedarville, IN and three nieces Mayla Nantz, of Bledsoe, Adrianna Hockenberry, of Totz; and Sydney Schrock, of Leo-Cedarville, IN; his aunt Dee Dee and her husband Bill Middleton, of Bledsoe and a host of loving cousins, family, and friends. David professed his faith, received Holy Communion, and was baptized into the Methodist faith on March 28, 2020. On the day of his passing family were comforted as they were able to video chat with him in the hospital with David telling each one that he was "doing fine and praying for you all." People often said of David, "he was the kind that would give you the shirt off his back." David was a talented dozer operator, and carpenter. He was teaching himself to hand forge metal tools until shortly before his passing, He was a student at the former James A. Cawood High School but received his GED certificate from Southeast's Adult Education program. Due to Governor Andy Beshear’s Executive Order, given on March 17, 2020, and based on the CDC recommendations to decrease the spread of Covid-19, all services for Mr. David Osborne will be Private. Rev. Gary Biddle will be officiating. Burial will be in the Osborne Family Cemetery, in Bledsoe. Pallbearers will be Chris Hockenberry, Bill Nantz, Riley Osborne, Andrew Whitehead, Mitchell Osborne and Bill Middleton. The Funeral service will be broad cast over Facebook as a courtesy provided by Mount Pleasant and available at the following link at 2PM on Tuesday April 21,2020: https://www.facebook.com/MountPleasantFH/ In lieu of flowers, the family requests donations to help cover funeral expenses. Donations can be sent to Mount Pleasant directly or over the phone at (606)573-1770. David was a friend to all and will be greatly missed by the community. Mount Pleasant Funeral Home is honored to serve the family of Mr. David Osborne.

David Mitchell Osborne, 41, of Bledsoe, KY, passed away peacefully late on the evening of April 17, 2020 at the Bluegrass Hospice facility in Lexington, KY from complications due to an infection of the heart. David was a Christmas gift, born... View Obituary & Service Information

The family of David Osborne created this Life Tributes page to make it easy to share your memories.