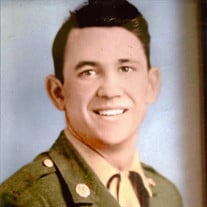 Elihu Bailey, age 88, of Bledsoe, KY passed away October 23, 2015 at the Harlan ARH. He was born February 19, 1927 at Bledsoe, KY to the late Abraham and Nancy Ann Huff Bailey. He was a construction worker and believed in the Pentecostal faith.... View Obituary & Service Information

The family of Elihu Bailey created this Life Tributes page to make it easy to share your memories.