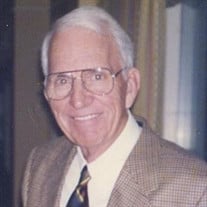 Harry King Buttermore, Jr. of Charlotte and Atlanta, died on October 4, 2016 at the age of 97. He was born on July 15, 1919 in Connellsville, Pa., the third of seven children of Harry King Buttermore, Sr., M.D. and Nell Kathryn Martin Buttermore. In 1921, the family moved from Pennsylvania to Liggett, Harlan County, Ky. where Dr. Buttermore became the company physician for the Liggett Coal Company at the dawn of the coal industry in Harlan. Harry and his siblings grew up in an idyllic rural community. They had free run of the mountains to hunt squirrels, fish, hike, play baseball and gather blackberries. The road from Liggett to the county seat was so rough that some of the Buttermore children stayed at an apartment in town during the school year, returning to Liggett on weekends. Harry’s family was one that helped others. His father delivered more than 5,000 babies in his general and surgical practice and received many patients in his home office. He made many house calls, often accompanied by Harry and siblings, and travelled on a railroad speeder when the roads were impassable. Harry attended the University of Kentucky and played saxophone in the marching band. After transferring to Transylvania University, he travelled with the acapella choir. In 1942, Harry married Betty Greathouse Talbott Buttermore with whom he will be reunited after a marriage of 68 years. His Dental school education was interrupted by the coal demands of World War II and he remained in the coal industry. At the height of World War II, the government asked that mines try to produce more coal for the war effort. As a result, the Bureau of Mines and Coal Age Magazine presented him with a Victory Production Award for doubling tonnage without accidents. For many years in Harlan County, Harry was superintendent of Elcomb Coal Company, and Mary Alice Coal Company. He owned Johnny Dollar Coal Company and was president of Ashland-Harlan Gas & Oil Company. He retired as co-owner of Dixie Cash Register Company in Lexington. He was a faithful member of the Harlan Baptist Church (1942-1969) and Calvary Baptist Church in Lexington since 1969. He was an enthusiastic golfer at Lexington Country Club, playing until very recently, and an ardent Kentucky Wildcat basketball ticket holder. He earned a perfect attendance award from the Harlan Lions Club, was county chairman of the Red Cross, and belonged to the Civil War Roundtable. He was a devoted son, brother, husband, father, grandfather, and great grandfather, an accomplished gardener, and a consummate self- taught mechanic and repairman of all things. He wrote three books about the Buttermore family history. Harry is survived by his devoted sons and daughters-in-law, Harry King Buttermore III and Karen of Atlanta, and Robert Talbott Buttermore and Janey of Charlotte, in whose homes he has lived since 2011; four loving grandchildren: Kara (Hunter) Blount of Greenville, N.C., • David Buttermore of Charlotte, Molly (Jimmy) Walker and Katy (Brian) Maclaga of Atlanta; and nine adoring great grandchildren: Hunter, Jr., Mary Frances, and Virginia Blount; Conner Buttermore; Riley King, Andrew, and Woods Walker; and Harlan and Eva Maclaga. Granddaddy proudly attended many of their school and sports events. Harry is survived by his brothers Rodney, Dalton (Betty), and Tom (Sharon); his sister Ruth Alice Pope (Dan); and a sister-in-law Rosemary Buttermore, along with 15 nieces and nephews and their children and grandchildren. Harry was predeceased by his parents; his wife Betty; his brother and sisters-in-law Willard (Anna, Jean); his sister and brother-in-law, Mary Jean Loving (Fred); his sister-in-law Margaret Buttermore; and his brother-in-law Robert M. Talbott (Evelyn). A memorial service will be held on Saturday, October 8, 2016 at 10:00 a.m. at the Harlan Baptist Church, conducted by his nephew, the Rev. John Nelson Pope. Pallbearers will be Harry’s nephews and grandsons-in-law. The family will receive friends at a luncheon at the church following the service and burial at Resthaven Cemetery. In lieu of flowers, memorial gifts may be made to the Harry King and Nell Kathryn Buttermore Scholarship Fund for Eastern Kentucky medical students at the University of Kentucky, Office of Philanthropy, Lexington, KY 40506. Mt. Pleasant Funeral Home is in charge of arrangements.

The family of Harry King Buttermore JR. created this Life Tributes page to make it easy to share your memories.

Harry King Buttermore, Jr. of Charlotte and Atlanta, died on...