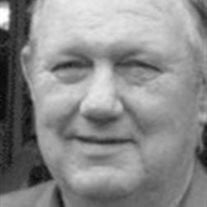 Kenneth Sergent, age 64, of Baxter, KY passed away June 24, 2013 at the UK Medical Center, Lexington, KY following a long illness. He was born July 22, 1948 in Harlan, KY to James Harold Sergent of Baxter, KY and the late Teddie Sergent. Kenneth was a worker at the mines in Cumberland, KY beginning in 1970. He was employed by and President of J. Harold Sergent Contractors, Inc. He was an honest and fair man who performed work for U.S. Steel, Arch of KY, Black Mountain Resources and Alpha Natural Resources. He was a Christian, a song leader and an elder for many years at the Poorfork Church of Christ and loved his church family. He loved his children and took enormous pride in having 10 grandchildren. He was an avid sports enthusiast and loved to watch his grandchildren play their sports. He loved to fish and it was one of his favorite past times and he enjoyed teaching his children and grandchildren the love of fishing. Besides his mother he is preceded in death by his brother, Harold Lee Sergent. Left to mourn his passage is his wife, Karen Lowry Sergent, his children: Malissa Sergent Lewis and husband,Otis Lewis, of Baxter, KY; Wendy Sergent Clem and husband, Jeremey Clem, of Baxter, KY; Kenneth Dallas Sergent and wife, Marlene Osborne Sergent, of Baxter, KY; Denise Sergent Lee and husband, Jeremy Lee, of Harlan, KY; his father, James Harold Sergent, of Baxter, KY; his grandchildren: Tucker Lewis,Hunter Lewis, Eli Lewis, Lily Clem, Dylan Clem, Maggie Clem, Dallas Sergent ll,Drew Sergent, Kevin Thomas Lee and Grant Lee; his sister-in-law, Jenny Sergent,of Baxter, KY; nephews: Allen Sergent, James Lee Sergent, and Matthew Sergent. Visitation will be Thursday, June 27, 2013 from 5-7pm at Mount Pleasant Funeral Home. Funeral will follow the visitation at 7pm in the chapel of Mount Pleasant with James Forrester officiating. Graveside service will be Friday, June 28, 2013 at 11AM at Middleton Cemetery, Baxter, KY with honorary pallbearers: Men of the Poorfork Churchof Christ, Bill Engle and Macky. Family and friends will be pallbearers.

The family of Kenneth Sergent created this Life Tributes page to make it easy to share your memories.