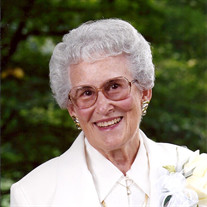 Lucille Souleyret, 94, of Catrons Creek, passed away May 15, 2016 at her home. She was born in April of 1922 to the late John and Lissie Hensley Shepherd. Lucille was known by many people in many different ways; as a Godly woman and member of Pansy Baptist church for 65 years, a lover of flowers, cooking, gardening and sewing. She was a big hearted animal fan who never met a stray she didn’t instantly love, but to her family she was simply known as Granny. She was a woman of strength (although she didn’t know it) and one of infinite wisdom despite a limited formal education. She taught herself to read and write while helping to raise her younger siblings after the passing of her mother and grew up to marry and raise two successful children of her own. Her family was her life and her pride was her children, grandchildren and great grandchildren. While her stories of days gone by, her pots of soup beans and fried ‘taters’ and her nights spent keeping her own stats on her beloved Kentucky Wildcats basketball team are all the things that will be greatly missed. None will be missed more so than the immense love she had for all she knew, especially the love for her family. Mrs. Souleyret is preceded in death by her loving Husband of 58 years, Ralph F. Souleyret; Parents,John and Lissie Hensley Shepherd; Daughter, Delzinna S. Belcher and Husband Dale Belcher; Daughter in Law, Lynda Souleyret; Son in Law, Kendell Howard; Grandson, Freddie Howard; Brothers, Albert Shepherd, Fielden Shepherd, Howard Shepherd and Billy Dan Shepherd; Sisters, Izetta Vaughn, Beatrice Thomas and Ruth Sprinkles. Lucille is survived by her Son, Ralph Souleyret Jr.; Daughter, Elizabeth Shepherd Howard; Sister, Maxine Turner; Grandchildren, Jeff (Leigh Anne) Belcher, Scarlett Belcher, Gina ( Darren) Souleyret Poore, Jaime (Chad) Souleyret Creech, Ken (Beth) Howard; Great Grandchildren, Jared Poore, Alyson Poore, Caitlyn Creech, Caleb Creech, Zachary Howard, Ryan (Kristina) Belcher, Michael Belcher, Jacob Belcher, and Mason Jones; Great Great Granddaughters, Blakely Belcher and Harlan Kaye Belcher. Special Caregivers, Loretta Blevins, Peggy Holt and Ruby Blevins. Visitation for Mrs, Souleyret will be Tuesday, May 17, 2016 from 12PM to 2PM in the Chapel of Mount Pleasant Funeral Home. Funeral services will follow at 2PM in the chapel with Bob Rouse officiating. Burial will be at Resthaven Cemetery. The family requests in lieu of flowers that donations be made to The Harlan Challenge Academy at 465 Grays Branch Rd, Grays Knob, KY 40829. Mount Pleasant Funeral Home is honored to serve the family of Mrs. Souleyret.

Lucille Souleyret, 94, of Catrons Creek, passed away May 15, 2016 at her home. She was born in April of 1922 to the late John and Lissie Hensley Shepherd. Lucille was known by many people in many different ways; as a Godly woman and member... View Obituary & Service Information

The family of Lucille Souleyret created this Life Tributes page to make it easy to share your memories.