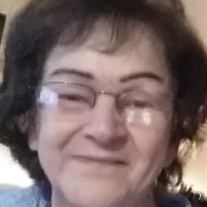 Margaret Pennington, age 73, of Bledsoe, Harlan County, Kentucky, died on Tuesday, February 5, 2019 at Lake Cumberland Regional Hospital in Somerset, Kentucky after a short Illness. She was born on August 15, 1945 in Leslie County, Kentucky to Archie and Effie Brock, who preceed her in death. She was a very faithful Christian woman and loved gardening, flowers and spending time with her family. She was a very loving mother and grandmother who enjoyed smiling and laughing. She Married Bruce Pennington, who preceded her in death on August 10, 2000 and they had four children. Preceding Margaret in Death are her Brothers, Herman Brock, Dwight Brock and Johnny Brock. Her Sisters, Hester Sparks and Janie Middleton. She is survived by her Sisters, Patsy Ann Brock, Donna Lefevers and Ann Woods. A Brother, Kermit Brock as well as numerous other family such as Aunts, Uncles, Nieces, Nephews and Numerous Friends. Margaret is survived by her son, Bruce Brent Pennington, his wife Karla and her grandchildren Dylan Jett Pennington, Brittany Paige Pennington and Chase Brenton Pennington as well as great grandchildren: Paytin, Presli, Paige and Paxton, survived by her son David Dewayne Pennington and his wife Penny and her grandchildren, David Tyler Pennington and Ashley Autumn Pennington; her daughter Kristal Yvonne Pennington and her husband Paul and her grandchild Jeffrey Daven Saylor; and her daughter , Margaret Dianne “DeeDee” Pennington and her husband Josh and her grandchild Blake Austin Bruce Pennington. Visitation in honor of Margaret will take place at the Green Hills Pentecostal Church in Bledsoe, KY on Friday February 8, 2019 beginning at 5PM until the funeral hour. Funeral Service will be February 9, 2019 also at the church at 1 PM, burial will follow in the Brock Family Cemetery in Bledsoe with Josh Click, Blake Pennington, Paul Fugate, Daven Saylor, Dylan Pennington and Alex Miller will serve as pallbearers. Margaret will be greatly missed! Mount Pleasant Funeral Home is honored to serve the family of Margaret Pennington.

The family of Margaret Pennington created this Life Tributes page to make it easy to share your memories.