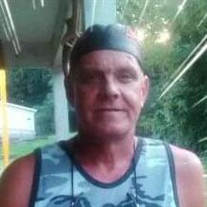 Randy Lee Owens was born to Donald and Brenda Jo (Good) Owens on June 14th, 1969 in Cleveland, OH. Randy passed from this life on February 1, 2020 at the age of 50 at Harlan ARH. Randy was preceded in death by the love of his life, Sonya Owens;... View Obituary & Service Information

The family of Randy Lee Owens created this Life Tributes page to make it easy to share your memories.