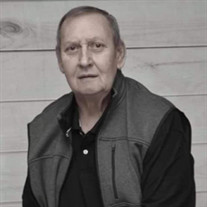 Raymond Lynn “Pop” Day, 72 of Cranks, passed away after a long illness with his loving family by his side. He was born on August 22, 1949 to the late Raymond Day and Mary Bell Greene Day Hurd. He was born and raised in Harlan County. Pop graduated from the first Class of James A. Cawood High School in 1967 then went on to attend Southeast Community College where he earned his Associates degree. After college in 1970 he Married the love of his life, Linda Day. Pop then began working for the Kentucky State Police as their Telecommunications Supervisor for 33 years. During his time there he helped originate 911 in Harlan County. He worked at Valley Lanes bowling alley for 4 years as Manager until they closed. Pop was also a college instructor and taught classes in Bowling at Southeast. He was also an ATV Safety Instructor. Raymond Lynn was very active in his families lives in every aspect. Such as he loved attending both of his Grandsons football games, he was very active in Boy Scouts Pack 149 with both of his Grandsons and would help do anything his family needed without a second thought. He enjoyed spending his time outside, especially on his tractor or lawnmower (If he hadn’t gotten one of them stuck!). He was saved and baptized at Friendship Baptist Church. Pop was a Mason for 50 years and served as the Past Master at Harlan Lodge. He was also a member of Harlan’s York Rite, Harlan Chapter #165 RAM, Harlan Council #91 RNSM and Duffield Commandry #42 KT and Harlan’s Scottish Rite, Lexington Consitory. Eastern Star, Harlan Chapter #297 O.E.S and a member of Oleika Shrine Lexington. He was also a Shriner. Raymond Lynn is preceded in death by his Father, Raymond Day; His loving Wife of 40 years, Linda Day; His Paternal Grandmother who raised him, Granny Mable Day and his Mother In Law, Mamie Sears. Pop leaves to mourn his passing his Son, Raymond Lynn “Ray” Day II and his Wife Tera (His very favorite Daughter In Law); Grandsons, Raymond Bradley Lynn Day and Brandon Ronnie Lee Day; Great granddaughter, Caroline Paiten Lynn Day and her Mother, Melissa Campbell; Mother, Mary Bell Greene Day Hurd; Sister, Monica Kay Bowen and Husband Al of Georgetown; Sisters In Law, Pat Law and Husband Bob of FL, Vicky Gatts and Husband Jay of GA, Kathy Price and Husband Ralph of AL and Jennifer Day of KY; Honorary Granny, Martha Brown; All of his KSP Family, Nieces, Nephews, Family and Friends will deeply mourn his passing. Raymond found an amazing Doctor as well as friend in Donna Smith Saylor who he called Red and Pharmacist Linda Burnett. His family could never thank them enough for all the love and care they provided for their sweet Pop. Now Pop is rejoicing in Heaven with his wife, the love of his life. Visitation for Pop will be held Saturday, March 19, 2022 from 4PM until 7PM at Friendship Baptist Church in Cawood. Funeral services will be held on Sunday, March 20, 2022 at the Church beginning at 1PM. Sean Daniels will be officiating. Burial will follow at Day-Jackson Cemetery with Raymond Lynn Day II, Ralph Price III, Bradley Day, Brandon Day, Chris Dixon and Drew Burnette serving as pallbearers. Honorary Pallbearers will be the Harlan High School Class of 2011, Harlan High School Class of 2018 and his lifelong friends, Dooper Jackson and Jack Allen. Masonic Rites will be performed at the Graveside. Mount Pleasant Funeral Home is honored to serve the family of Mr. Raymond Lynn “Pop” Day.

Raymond Lynn &#8220;Pop&#8221; Day, 72 of Cranks, passed away after a long illness with his loving family by his side. He was born on August 22, 1949 to the late Raymond Day and Mary Bell Greene Day Hurd. He was born and raised in Harlan County. Pop... View Obituary & Service Information

The family of Raymond Lynn "Pop" Day created this Life Tributes page to make it easy to share your memories.