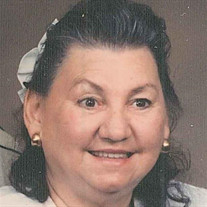 Rena Lou Stewart knew the importance of an education, reading and relationships with people. She completed her formal education at age 48 and wanted to help others. Rena Lou loved to travel and enjoyed writing letters to family and people she met in her many journeys. Rena Lou (Cawood) Stewart, 80, of Crestline passed away Thursday, August 3, 2017 at Galion Pointe where she had been a resident for the past five years. Born May 27, 1937 in Cawood, Kentucky, she was the daughter of Robert and Flora (King) Cawood. She married Earl Stewart on July19, 1958 and he preceded her November 27, 2005. She graduated from Hall High School in Grays Knob, Kentucky and served in the United States Woman’s Army Corp from 1955 to 1957. Rena Lou earned her Bachelors of Education degree from Youngstown State University in 1985. She worked as an inspector at General Motors Plants in Ontario/Mansfield and Lordstown. Rena Lou attended Galion Free Methodist Church now known as Grace Point Church. She was a member of the Friends of Crestline Public Library, Friends of Galion Public Library and Daughters of the American Revolution. Rena Lou enjoyed photography and loved spending time with her family, especially her grandchildren and great-grandchildren. She is survived by children Jivonna Renee Stewart of Las Cruces, New Mexico; Jennifer Stewart of Galion and Jeffery Earl Stewart of Caney Creek, Kentucky; grandchildren Sarah Barker of Galion, Jeffery Tyler Stewart of Albuquerque, New Mexico and Kayla Massengale of Evarts, Kentucky; great-grandchildren Alisah Williams and Elijah Barker; cousins Barb and Rusty Moss of Lawrenceville, Georgia and Arlie Daniels of Las Vegas Nevada. In addition to her parents and husband she was preceded in death by daughter Jo Flora; sisters Virginia Kirkland and Gertrude Thorton; brother Robert Cawood and sister-in-law Ollie Cawood. The family will receive friends from 6 to 8 p.m. Tuesday, August 8, 2017 at Richardson Davis Chapel of Snyder Funeral Homes, 218 South Market St., Galion, Ohio 44833. Graveside services will be held at 1 p.m. Thursday, August 10, 2017 at Cawood Family Cemetery in Cawood,Kentucky. Memorial contributions may be made to Alzheimer’s Association, Galion Public Library or Crestline Public Library in care of the funeral home. Mount Pleasant Funeral Home is honored to serve the family of Mrs. Stewart with local arrangements.

Rena Lou Stewart knew the importance of an education, reading and relationships with people. She completed her formal education at age 48 and wanted to help others. Rena Lou loved to travel and enjoyed writing letters to family and people she... View Obituary & Service Information

The family of Rena Stewart created this Life Tributes page to make it easy to share your memories.

Rena Lou Stewart knew the importance of an education, reading...