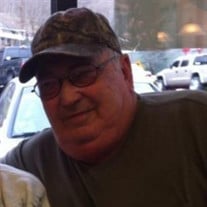 Robert Kenneth Cloud, 78 of Catrons Creek, passed away January 29, 2022 at Harlan Appalachian Regional Hospital. He was born to the late Robert and Sarah Thacker Cloud on February 24, 1943. He was a one of a kind man. A Veteran, husband, father,... View Obituary & Service Information

The family of Robert Kenneth Cloud created this Life Tributes page to make it easy to share your memories.