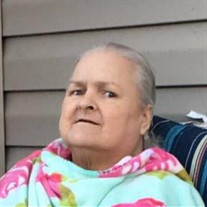 Sharon Lynn Lewis, 64, of Loyall passed away Sunday December 17, 2017 surrounded by her family at Hazard ARH. She was born February 2, 1953 to the late Ted and Mary Hall. She was a native of Baxter, Kentucky and had lived in Harlan all her life.... View Obituary & Service Information

The family of Sharon Lynn Lewis created this Life Tributes page to make it easy to share your memories.